There are many stories from throughout Klingberg’s history of how the generosity of friends and strangers has supplied the needs of the children in our care. One remarkable case is that of the farmers in Maine who donated from their potato harvest every year for 40 years! 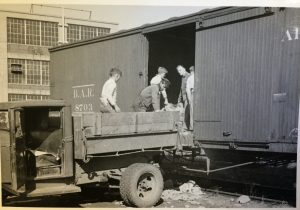 October 22: It is with much joy I record the following. Through a letter from a friend, information was received some time ago that several friends in New Sweden, Jemtland and Stockholm, in the State of Maine, had started to fill a railroad car with fruits and vegetables, which they intended to send to the Children’s Home, and today the big freight car arrived.  How glad we were when permission was granted us to open its doors and begin to unload its contents!  There were 600 bushels of potatoes in the car, together with 17 bags of turnips, 13 barrels of apples, carrots, beets, butter and a barrel of four.  It was found that after the bins had been filled there was some left over which was sold and the money thus received was used for the purchase of shoes and warm clothing for the orphans.  Thus we were supplied for the whole winter.  Through the kindness of the officials of the railroad companies the car went all the way from Stockholm, Maine to New Britain, Connecticut, a distance of about 700 miles, entirely free of charge.

This was only the first example of a friendship that continued for many years. In 1930 a new vegetable cellar was built behind the orphanage building 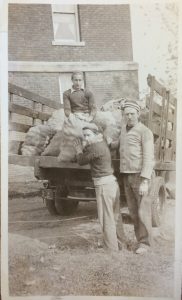 and was promptly filled with that year’s donation of 600 bushels of potatoes, “nearly filling the whole space,” Klingberg wrote. (The cellar can still be seen on our hill, with its chute sticking up like a short chimney from the ground.)

Over and over again, the annual reports of the Klingberg Children’s Home recount these gifts of potatoes and the gratitude of those who received them. In 1945, John Klingberg wrote of these annual gifts, “If the reader will pause a moment and meditate on this he will soon agree with me that there are still many good people living in the world.” Seventy years later, the truth of this statement resonates deeply with us at Klingberg as we reflect on the generosity of each person who gives toward our programs.

The last gift of Maine potatoes occurred in 1951, with a cash donation in 1952. In the spring of 1957, Klingberg noted the passing of the kind friend who had arranged for each delivery. His wife followed soon after, and their friends and relatives made a donation to Klingberg in their memory. To quote John Klingberg one more time, “we shall be grateful always for the inspiration and the encouragement we derived from their ministry, and for the memories we inherit.”