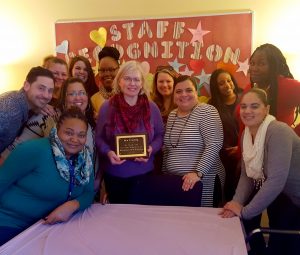 On January 21, 2016, the Intensive Family Preservation program held an appreciation lunch to honor Beverly Truebig. Staff members were able to share stories with her of the many lives she has impacted during her time working as part of our team. Bev Truebig has been a partner with Klingberg’s Intensive Family Preservation Program since 1997, when she was matched with Klingberg through the Covenant to Care Adopt a Social Worker Program. The First Church of Christ Congregational has been generous to the families we work with and throughout the years, Bev has been an outstanding liaison coordinating pick-ups and drop-offs of donations, including holiday gifts, Easter baskets, school backpacks, and so much more. We have been blessed by the donations but more so by Bev’s energy and desire to help.

Bev has been the person to call when a client is in need of anything and everything. Bev never says no to helping. She makes miracles happen! Her efforts to get the word out to members of the First Church congregation and coordinate with the Adopted Social Worker, Marcia Watson, have been incredible. She has been diligent at obtaining items in a timely manner and always seems available to discuss and plan for the needs of a family. She is genuine in her care and concern for families. Bev has a big heart and it shines, not only with the big projects she takes on but the day-to-day needs such as diapers, food, clothing, and furniture for families. She goes above and beyond: in addition to all the work that she does on behalf of the church, Bev has also for many years made a personal financial donation to one family annually in memory of members of her family. Funds have been used for things such as cribs, car seats and baby items, coats, snow boots, hats, gloves, and winter clothing.  These are just a few examples of how her personal donation has helped families in need in our program.

Bev has supported IFP for so long that although she is retiring from her position at the church and someone else is taking on that role, she will never be replaced. Bev has been named an honorary IFP Worker for all she has done over the eighteen years we have partnered with her. She will be missed.