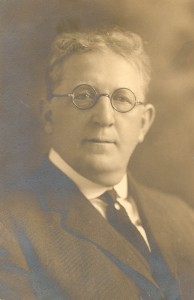 John Eric Klingberg learned the hard lessons that poverty teaches as a small boy growing up in Sweden in the late 1800s. Although destitute as a child, years later in his memoirs he would recall with amazing clarity those individuals, authors and circumstances which enriched and cultivated his spirit into fertile ground where dreams could grow.

In 1903, he was pastor to a poor, small congregation in New Britain, Connecticut when opportunity knocked upon the door of his humble abode. His faith in God and his aspiration to one day do something for “boys and girls in needy circumstances” was put to the test when three young boys, found abandoned and living in a shack, needed a home. The dream took root and blossomed across the decades as nearly 2000 children – orphaned, abandoned or whose families were unable to care for them – took up residence in what became the Klingberg Children’s Home.

By 1968, the torch had been handed over to Rev. Klingberg’s grandson, Haddon Klingberg, Jr. Ph.D., whose father, Haddon, Sr., had directed the Children’s Home for the previous 22 years. Changes in the care of orphaned and needy children nationwide prompted a shift from being a “substitute home” to providing treatment services for children and their families. The Children’s Home became Klingberg Family Centers, Inc., a private, nonprofit organization whose goal is to strengthen families, to reunite children and families whenever that is safe and possible, and to assure permanent, nurturing families for children. Today, Klingberg Family Centers provides services to thousands of persons each year through a wide range of programs.

The Klingberg History Museum, which opened in 2014, was created to make Klingberg’s history more accessible and display our extensive archives. Vintage photographs cover the walls, accompanied by text telling the story of Rev. Klingberg and the development of the Children’s Home. Also on display are various artifacts dating from the earliest days of the Children’s Home through the end of the orphanage era.

For more information on the Klingberg History Museum, please see the brochure linked below or contact Mark Johnson at (860) 832-5526 or markj@klingberg.org. 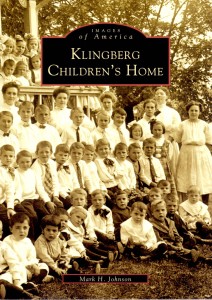 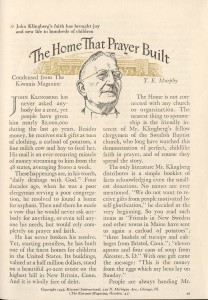 Read an article from the October 1943 Reader’s Digest