Sixty years ago this week, in September 1955, the local newspapers carried the news of a groundbreaking ceremony at the Klingberg Children’s Home. Depicted by a cartoonist in the New Britain Herald as a fast-growing child, buttons nearly bursting from his shirt, the Home was in need of additional space to house children.

The building for which the ground was broken, completed two years later, was a dormitory space for 20 young children with an infirmary, connected to the main building by an underground tunnel. Known as the Junior Unit, it continued to house the younger children through the transition from orphanage to residential treatment facility. 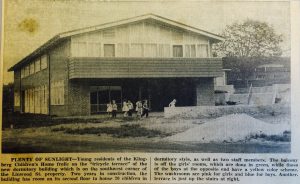 Today this building holds offices for several of our programs, including Intensive Family Preservation, Child Abuse Treatment Services, mentoring, and staff training, with some space currently being rented out to another organization. It is also home to our Fifth-Year Program for students who choose to take an additional year after high school before leaving Raymond Hill School.