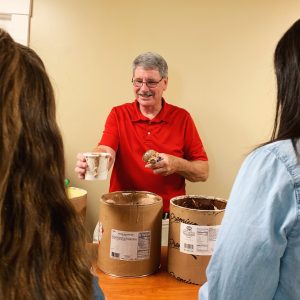 July we celebrated (and also lamented) the retirement of Dave Tompkins, Vice President of Programs. Dave has been a leader in the field of children’s mental health and child welfare for more than 40 years. Dave has worked in the field literally his entire adult working life. It was Klingberg’s great fortune that in October of 2010 Dave joined the Klingberg team as the Vice President of Education, Child Placement, and Group Care, essentially overseeing all of our campus-based programs.

Early in his tenure Dave effectively led the transition away from residential treatment into an expansion of our community based offerings. Dave became the sole Vice President for Programs within two years of his arrival. He went on to consolidate the program leadership structure; oversee the opening of several new programs, including the Children’s Advocacy Center; champion our pursuit of Results Based Accountability; play a leadership role in the selection and implementation of our new Credible electronic health record system; promote and nurture the creation of our Nexus: Professional Development Center; among many other accomplishments. Dave has served on, and in many cases chaired, several agency committees, including Professional Development, Quality Improvement, Health and Safety, and Cultural Competence.

Dave has always been willing to take on additional responsibilities and tasks. He has been a volunteer at every Klingberg event and attended after-hours functions on a regular basis. He has been quick to pitch in regardless of the task, moving furniture or pushing a vacuum cleaner in preparation for an assembly or meeting, for example. He is a true example of servant leadership!

Over the past eight years, Dave has aptly demonstrated the breadth of his knowledge and skills and the depth of his character and integrity. We wish him the best in this next phase of his life.

As COVID-19 continues to spread through our country and region, a number of safeguards have been put into place to protect our clients and families, staff, visitors, and surrounding communities. In addition to increased cleaning efforts, hand sanitizer, and distribution of information, we are taking the following steps to prevent the spread of the virus.