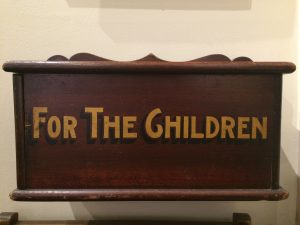 It is the giving season, and I am sitting in my office thinking about the many phases of giving here at Klingberg Family Centers. We have an incredible history of thousands of people donating from the very first days in 1903 until today. We owe our very existence to these wonderful folks. Rev. John Klingberg, our founder, knew beyond a doubt that starting the Children’s Home (as it was known then) was what God was calling him to do. In his diaries he came to the conclusion that as he had no money, his poor congregation could hardly pay him, and he knew no one with money, he would just have to trust in God to help him. He never asked anyone for donations, but they started to flow in and never stopped. The Readers Digest captured this story in an article titled “The Home that Prayer Built” in 1943.

In the early days, there were wonderful stories of kind people doing what they could to make donations to sustain the Children’s Home. There was the “Lucky Money Lady,” as she called herself, who gathered all the coins she found on the ground and presented them at the end of the year. Or the Iowa chicken farmer who gave to the Home the proceeds of eggs laid on the Sabbath. Every potato harvest in New Sweden and Stockholm, Maine, the farmers would fill a boxcar and have it taken to New Britain to fill the potato cellar to feed the children through the winter.

New Britain was a booming industrial center, and local businessmen saw the needs at the Home and gave generously. Charles Moore stopped John Klingberg on the street one day and offered him $5 to start a building fund for the Home. In 1908, Howard Platt led a campaign asking his friends to join him in supporting Klingberg’s work. And prominent business owner Philip Corbin gave several anonymous donations that paid for more than half the construction costs of the orphanage building on the hill. 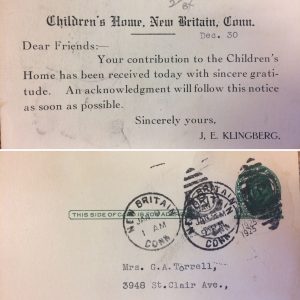 Through the years the needs of children and families changed and new programs keeping families together became the priority. People continue to give generously to John Klingberg’s original belief that every child deserves a safe and loving home. People today don’t give the Sabbath egg money (well, maybe some do!), but the ways in which people give today are as varied as ever. From checks to credit cards, from PayPal to sponsorships, all gifts are received with the same thanks and appreciation as the very first day.

Time is valuable currency today. Many of our friends donate their time and talents at Klingberg. Some come in groups to help us with our major fundraiser; others raise funds by participating in other events and getting sponsors to give to Klingberg. Others have given possessions like antique automobiles to our Auto Restoration Program.

There are some among our friends and donors who have desired to leave a legacy by including us in their wills as one final gift and a final exclamation point that they believe in what we do for children. And some have left perpetual support through a charitable trust, with the interest supporting us for years into the future.

Over the years of Klingberg history, from 1903 until today, many things have changed: the needs of children and families, the programs to help them, and the methods of giving to support them. But two things have not changed with time: the mission of Klingberg to make it possible for children to be raised in a safe and loving home and the people who surround us with their love and compassion for those we serve and their investment to accomplish it.